I’ve already written about the Ring’s smart-video bell in an earlier article, but instead of replacing the batteries, I chose to go hardwired. At the beginning of the project, I didn’t think it would be that complicated.

This is the first article from which an English version is also being made, as I found virtually no meaningful help in English, so I decided to write my own experience.

But you said it’s fine with battery only! 🔋

Yeah, we used the Ring Video Doorbell 2 with battery only for a year. If the battery reaches 30%, it sends push notifications and email reminders. In this case, I only had to grab one of the fully charged spare batteries out of the drawer and switch it in 2 minutes.

The main reason behind switching to hardwired was that I already contacted an electrician for other projects as well, so this was the perfect time to switch (it’s not THAT uncomfortable, so I just did not care about this issue for a year). And yeah, I thought that it would be an interesting topic for the blog as well.

Disclaimer: Hardwiring the Ring Video Doorbell is great, but the device still needs its battery. The hardwiring is keeping the battery powered, and charging it really slowly. It is possible to drain the battery even when the device is hardwired (doing heavy tasks for long time, like live feeds for hours, etc.), and the device cannot run on hardwired power alone.

What would it look like if everything is ideal? ❓

Basically, if you already have a doorbell, there’s no big stunt to do: most of the existing low-current doorbells are compatible. You just have to take the old device off, and connect the two wires to the Ring’s inputs and we’re done. As I learned there are 230V doorbells as well, so be careful. Reminder: I live in the EU.

Sadly we do not have any existing doorbell at our apartment, so we had to do it from absolute scratch. I read all the available material and guide on the Ring website, picked up and read the user manuals and instruction booklets, but none of these gave much useful info.

I got this drawing from Ring: So we’ll need an 8-24V alternating current AC transformer, and a 25 Ohm 50 Watt wirewound resistor. Great. 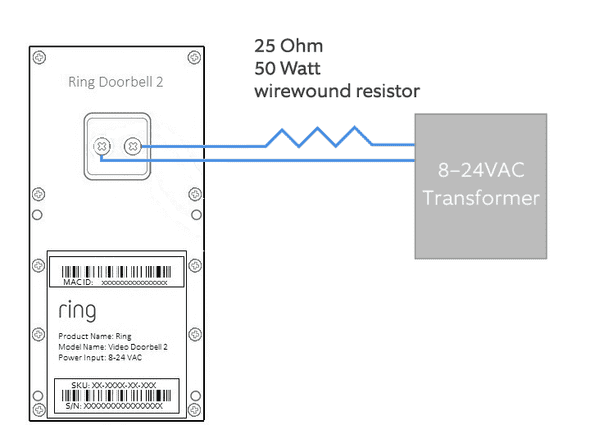 The problem emerged when I only found direct current (DC) bell transformers at the electrical stores. The store clerks were sure that I am speaking nonsense, since why would I need an AC transformer, and a 25 Ohm 50 Watt wirewound resistor is a massive overkill for a doorbell, so that shouldn’t be right. Since the Ring manual clearly said AC everywhere, I didn’t let myself be persuaded (more on that later).

They recommended an 11.5V AC transformer - originally made for halogen lamps -, which sound OK for me (I’m clearly no expert on this), since 11.5V is more than the 8V minimum from the Ring manuals (8-24V). 10 out of 10 guys said that the wirewound resistor is unnecessary, and they didn’t have any of those on inventory, so I rolled with it.

Spoiler: These two decisions were not smart.

I arranged an appointment with the electrician, he made the wiring from the breaker box, didn’t have to open any new holes on the wall (although we found out that I had some epically divine luck with mounting the Ring Video Doorbell 2 to the wall, since I drilled the 3 holes right next to the main power cord). He connected the 11.5V AC transformer (made for halogen bulbs), with no resistor, and connected the Ring Video Doorbell 2.

If everything is fine, the button lights up with a constant solid white light, indicating that the device is connected to a constant low current (Hardwired).

Well, no surprise, the button did not lit up, and the power source was still came up as Battery Powered in the app. Interestingly it said that the solar charger is connected, which was clearly not the case. 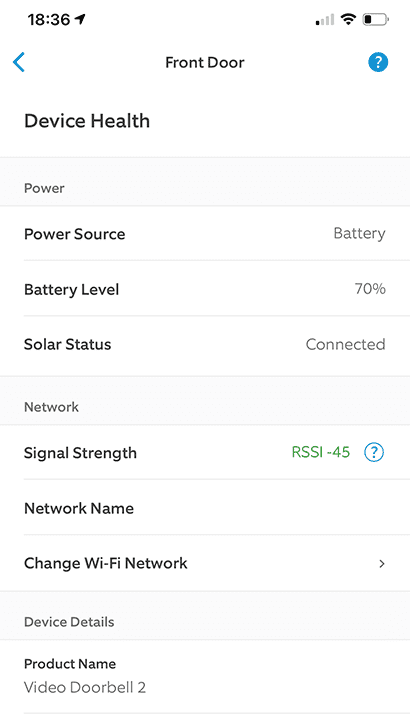 Since obviously we did not connect any solar charging device (there is a solar-powered frame for the doorbell, but that is sadly no option for me), the electrician’s tip was that it is possible, that the device is determining the power source based on whatever resistance it got from the system (eg. is there any resistor inside or not). We measured it on the wires, 11.5V came out on them, so based on the attached image, it should be good, the only thing is missing was the wirewound resistor.

So let’s get one.

In the second try, we tried to include the wirewound resistor specified by Ring. The first step was where the hell can I get a 25 Ohm 50 Watt wirewound resistor? I asked about that at the electrician stores and the maximum they had with 25 Ohm was 5 Watts. I went through all the related shops in my city, but obviously this thing was nowhere to be found, plus again, everyone thought that I am some lunatic. Finally I ordered one from a webshop, they sent it via GLS in 2 days, and it was around €5,5 with shipping.

Made a new appointment with the electrician, he installed the wirewound resistor, we measured the wires again, it should be good.

Well, it was certainly not. The power source still said Battery, and indicating a connected solar charger (the doorbell clearly did not charge from the non-existing solar charger).

That was the first time when I called Ring customer service on the phone. Luckily they provided a international green number, so it was free to call even from Hungary.

Customer service is available in major international languages, I went with English, but if I remember correctly, they had German, Spanish and French as well. I called them on Friday night, but because of the different time zones, we were still on time. I got a nice agent, who although wanted to solve my issue, just couldn’t help me effectively.

First of all, we had to deal with the fact that in Europe, we do not use 110V, we use 230V, and my Ring Video Doorbell clearly wants alternating current (AC), not direct current (DC).

Once we managed to discuss these, and the fact that they own user- and installion manuals are saying that the doorbells only work with AC, the agent started the remote diagnostics. Of course, first we had to do the dance, restarting the device, resetting the device, set up from scratch. None of these worked by the way, but the ritual had to be done.

So it turned out that despite the fact that the 11.5V from the transformer is indeed more than the required minimum 8V, but the Ring Video Doorbells are not compatible with transformers made for halogen bulbs, since those doesn’t deliver voltage constantly and evenly, so they won’t work. The agent’s advice was to get a more powerful (24V) AC transformer specially made for doorbells. Later I found an article well-hidden on the support page, where they state this clearly.

After a long search, we finally managed to find an AC transformer specially designed for doorbells, were you can wire it for 8V, 12V or 24V AC. It is still incomprehensible to me that this did not come up in any of the electrical shops (I clearly said what transformer I need, and why I need that). In the end I bought it from a big chain’s webshop (Praktiker). Way to go mom and pop stores.

Fixed one more appointment with an electrician, he was as eager as me to solve this.

Luckily there were 2 slots left on the breaker box’s rail, so this snap-on transformer fit nicely. 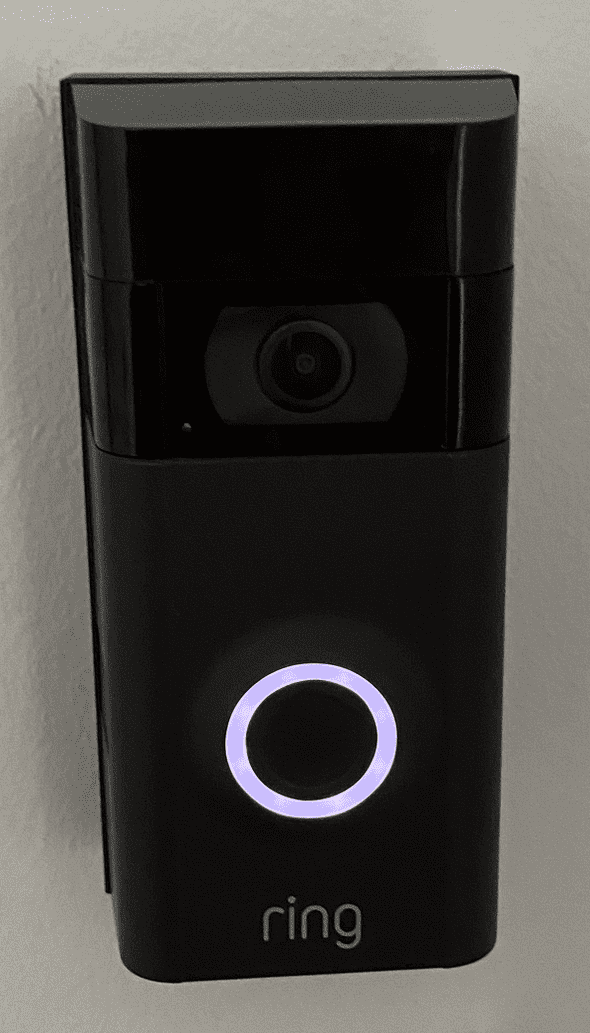 The doorbell’s button shined solid white, we were happy. I opened the app, and sadly faced the same stuff: Power source: Battery. Damn.

Another phone call, remote diagnostics. It turned out that on the backend, the device already shows up as hardwired, so there is a client-side visual bug.

We agreed to monitor the device for a week to see if there would be a change or to see if he was charging the battery.

The next day, I saw that the battery charge level had risen, showing plenty of 3 percent more than the night before. Power Source still showed up as Battery, the button was shining white. It seemed to be really “just” something of a visual bug at the app. 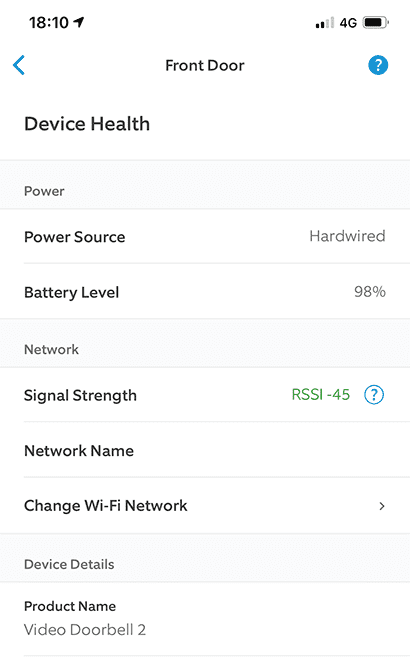 4 days passed, and it switched to Hardwired in the app as well and has been working flawlessly ever since.

In the case of a non-existing-doorbell system and wiring, it does not seem smooth to hardwire Ring video doorbells, and unfortunately the manufacturer’s documentation is not very good in this either.

There is completely different information in the user manual than in the hidden web help, and in addition, customer service also says nonsense (110V in Europe, connect to DC, etc.) on the subject.

I didn’t even find any help or articles in English. It either went right away for others, or they just couldn’t solve the problem.

That’s why I decided to publish this article in English, for the first time in this blog, to see if it would help others who give their heads to such a warped idea.

After all, it took 3 sessions with the electrician and 2 calls for customer service, but the issue was resolved and the video bell is already running on a constant power supply, hardwired.